Referring to the ESCNJ’s “Factors Influencing Placements To Private Special Education Schools” report, which summarized comments from the meetings, Assistant Superintendent Gary Molenaar said some private schools were in the best interest of students and families, particularly those requiring significant medical and clinical support services.

Mr. Molenaar, who participated in the meetings, said although the ESCNJ has a full time, onsite medical director/psychiatrist, full time nurses, therapists, and counseling services, it is not designed for students with severe medical issues to the extent that some private schools are.

“Our focus leans more towards the academic area, so placing students in a private school whose primary focus is medical support makes sense,” he said.
Another placement factor was an assumption by some parents that higher tuition rates for private special education schools meant their programs were superior to those offered by the ESCNJ.

“Most people are of the mindset that higher tuition mean stronger programs, and while that is a reasonable expectation, nothing could be further from the truth in this instance,” Mr. Molenaar said. 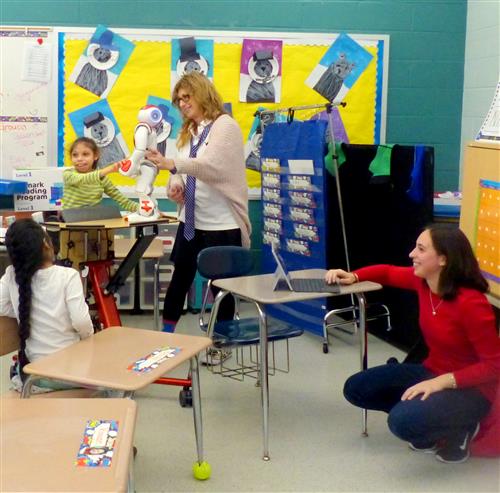 Mr. Molenaar said ESCNJ meets regularly with the home district's child study team to determine if the student has progressed to the point where he or she could be transitioned to a “less restrictive environment,” including a different ESCNJ program, or returned to their home public school district.

“Private schools do not really have the LRE mandate that we, as a public receiving school district have,” he said.

A major initiative has been the use of programmable robots, an engaging resource for students to use to become familiar with computer coding, a high in-demand workplace skill. The robotics curriculum also further enhances students problem solving, socialization and project collaboration abilities.

“The robotics program and our Computer Coding Club help students learn about technology that is transferable to the job market,” she added.
The robotics initiative was featured in presentations at last October’s New Jersey School Boards Association Convention, and Techspo 17 Conference earlier this year.

The CBI program teaches students functional and independent living skills, ranging from: learning to access public transportation, shop for food and clothing, cook, clean, conduct themselves appropriately in public settings like restaurants and movie theaters, and build resume writing and job interviewing capabilities.
Students also have many opportunities to work in a variety of jobs because of the outstanding community partnerships  established over the years.