The Governor is Among the Popcorn For The People 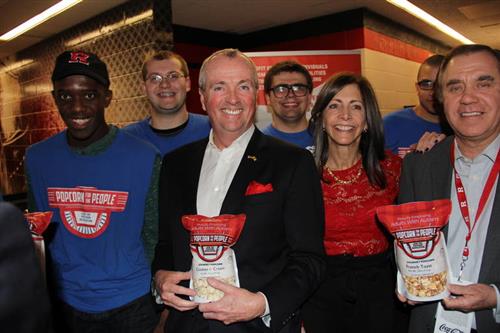 PISCATAWAY, NJ - Although the Rutgers men's basketball team was struggling on the court Wednesday night in its ultimate loss to the University of Michigan, the big winner appeared to be in the hallway of the RAC, where Popcorn For The People received a visit from Gov. Phil Murphy and his entourage at halftime.

Murphy, along with First Lady Tammy Murphy, Assembly Speaker Craig Coughlin, Middlesex County Freeholder Director Ron Rios and others, quickly stopped over to buy some popcorn and take photos with the participants.

The non-profit has been a mainstay at the RAC this entire basketball season, selling popcorn from two stations on either side of the court. The nonprofit was established to create meaningful employment for those with autism and other disabilities, aiming to combat the current 80% unemployment rate in the autism community.

Popcorn For The People trains and hires adults with autism to create, cook, package, and sell uniquely flavored gourmet popcorn. Many of these adults are from the Educational Services Commission of New Jersey, with its headquarters a mile or so from the RAC on Stelton Road.

Popcorn For The People also set up its stands at Rutgers football games and this year expanded to Philadelphia, appearing at Eagles games.